The day after we bought the house, the previous owner was so nice as to walk us through the details. As he was about to leave he turned around and said: “I almost forgot. But we had to take down a pine tree that was dangerously close to the house. You need to replace it. It’s the law. Don’t forget it, the fine is 600 euro’s. All the details are in the red file on the kitchen table.” 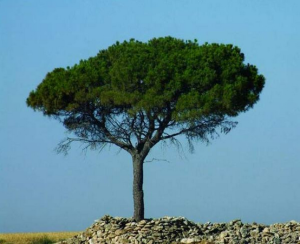 Inside we glanced at a high pile of incomprehensible bureaucratic papers and decided it was still freezing and also, we had renovations to think about. Weeks went by, the weather started to improve and soon we started working on the outdoors. We had also bought a piece of land next to the main house with a ancient dove tower in ruins and, I estimate, close to a trillion trees. I’m not exaggerating. The woods were so immensely dense, that you needed a machete to make your way through it. We had enough trees on our hands as it was.

End of March came another note from the previous owner. Had we replaced the pine tree yet? O yes, the tree again! No we hadn’t, and actually we didn’t exactly know what to plant anyway. We wanted a pine tree. To me, they are the most Italian trees possible. But our neighbors told us that pine trees are intruders from the south. Since we’re in a protected area of the river Tiber we needed a native tree and therefor, unfortunately, a pine tree was not allowed. We abandoned the project again. 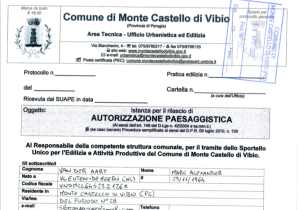 Not for long however. A couple of days later a new reminder arrived, including some of the trees that we were allowed to plant. I googled them and all of them were oak trees. This was kind of annoying, since we were cutting down several very small oak trees every day. We might as well use one of those, but then again we needed an invoice to prove that we actually bought the oak tree. This is Italy, and the bureaucracy wants to make sure that you do not engage in illegal behavior. To make sure you don’t, you have to document every tiny step with shiploads of paperwork. No receipt, no proof. No proof, a fine.

We remembered that not taking action would end up in paying 600 euro’s AND planting a tree, so we set out to find one. This proved easier said than done. In Italy sales staff doesn’t want to give you the idea that they are trying to sell you something you might not want. Which meant in this particular case, that we had to comb out the premises by ourselves, only to find one single oak tree at 100 euro’s. This was really not motivating.

We decided to go home and to finally go through the pile of paperwork to see if we could find the entire list of allowed trees that were not also oak trees. Italian is not my first language, let alone bureaucratic Italian that is composed to put an army of legal advisors to work. Nevertheless, after a couple of hours we found a list of trees and an underlined sentence right underneath which told us the deadline was today! 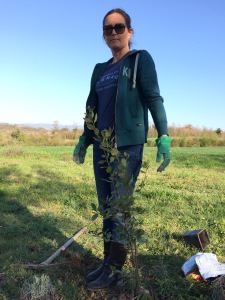 Okay, that was it. We jumped into the car and drove back to the nursery to get the really expensive oak tree. In a final attempt to change our fortune, I tracked down a sales person and presented the Italian instructions to her. In my best Italian I pointed out that I would go with anything, as long as it wasn’t an oak tree. She smiled, happy to be able to help. ‘I have just what you need. It’s the last one. It’s a nice evergreen and very native to the area. It will do splendidly in your garden.”

Minutes later I stared down at a really small tree that reminded me of – the also unwanted – holly with its prickly leaves. But there wasn’t really an alternative, was there? Grumbling I went to pay the 8 euro’s and held on very tight to my receipt. Although it was pouring down, we planted the tree immediately and sent all the paperwork to the former owner right away.

That evening, we shared our tree saga with our Italian neighbors and asked if this was going to be the procedure for every major tree we were taking down. They stared at us in disbelief and then replied: “Noooo, nobody does that. Ever.”