I have often wondered what I would do if I were to find an animal in need that had no chance to survive. Would I drive over it? Kill it with a blow to the head? Suffocate it even? I have never had to answer this terrible question. Until last night.

We we’re driving home and saw a beautiful porcupine, all spines up shuffle away hastily from our gate. On closer inspection, we saw another one, belly up on the side of the road. “Oh no!” I said, “I’m just hoping they killed him when they hit him”. Whomever ‘they’ were, they drove over this magnificent animal and left it on the road side to die.

Marc suggested we call our Irish friend who is a retired vet. Although past 11 pm, she picked up the phone after it rang for the second time. She immediately grasped that we sought advice how to kill the porcupine and the best, yet not helpful advice she had, was to shoot it. We have no gun and we’re not exactly befriended with the many Italian hunters here. We thought of calling our Italian vet, but thought she might find us ‘people from the North’ silly to put up such a show for a wild animal. The last thing I could come up with, was to text our Italian neighboors, but they had already gone to sleep.

So we didn’t shoot it and we didn’t hit it in the head either. We just couldn’t bring ourselves to do it. And so we went to bed, hoping some fox would find him and finish him off. Does that sound cruel to you? We didn’t feel too good about it either.

The next morning we found the porcupine still alive on the road side and figured we needed to get him to a vet. Our neighbor returned our text offering to call the vet and explain the situation. We prepared to take off as soon as possible, when my friend called. He did get in touch with the vet. Oh good! But, not so fast, the vet couldn’t help us. What? The porcupine turned out to be a highly protected animal and even moving it, would mean a fine. God darn, these Italians with their insane rules! There’s an animal in the road dying! No need to get excited, my friend told us. We needed the Forrest Service who would send a special vet. But hey, for some reason I didn’t grasp, this service wasn’t in force anymore. Now my friend needed to get in touch with the police in Perugia and THEY would take it up with the police in Todi. Well, maybe I need to work an my Italian still, but this sounded like it was going to take a very, very long time before help would show up. 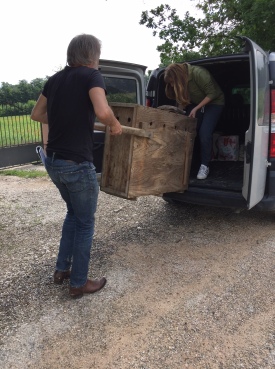 We went back to our injured friend at the road side and put some warning signals up to prevent him from being hit again. His prospects looked very grim to me, when my phone rang once again. Good news from my neighbor! A specially trained vet for wild animals was on her way. I guess this was the right time to offer my apologies for my earlier opinion about Italian rules, but I had to see her arrive first.

Indeed a young woman drove up a good hour later, and presented herself as the vet from Perugia. She examined the poor animal and thought there might be a tiny chance she could help him, seeing one hind leg move. Marc helped her to get the porcupine in a special, wooden case and they took off, leaving only a dozen of beautiful spines from his back behind.

We set out to resume our work. There’s always enough to do in and around the house, not to mention other projects like building websites. My Irish vet friend contacted me to find out how everything went last night, and I told her what had happened. “How is he doing now?” she informed. And at that moment I received a text from my Italian friend. The vet from Perugia just called. They had had to put the porcupine down.

Rest in peace my little friend. May we all drive a little bit more carefully.