I don’t know who screamed louder, Bébert or me when I erroneously stepped on his furry 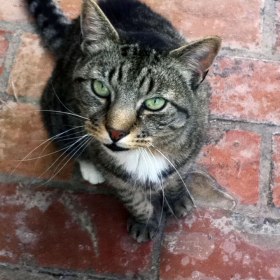 belly that he turned up in the dark to welcome us. His teeth sank deep into my calf that on inspection showed four little red spikes that didn’t bleed. Bad news. That love bite took me to the ER on a Sunday night and cost me about 1,600 dollars. Thank God for Dutch health insurance and go to hell you for-profit-greedy-Brooklyn-health-care-basterds that even tried to sell me an X-ray to see if my bones hadn’t been hit.

We didn’t stay angry, Bébert and me. It had been love at first sight anyway. My fiancé and me adopted him from the BARC Shelter in Williamsburg, a no-kill shelter where we occasionally volunteered as pet socializers. He was a birthday present for my fiancé who was eying a cute black feline. I happened to open the case of a huge tiger tomcat that immediately jumped onto my lap. When my fiancé sat down next to me, he stretched out his majestic body on both our laps. He was so smart, he knew he had us there and then. 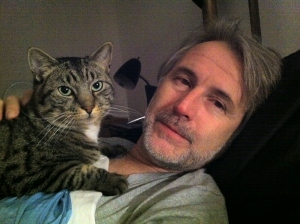 Netherlands. Two weeks before, I had learned that my mother was fatally ill and when we came home to this new house, sad and exhausted, we were so happy to have him there with us. He was a happy figure in my every-day e-mails to my mother and he really became part of our little family. We stayed in that apartment for only a year. The next-door bar smoked us out by then with their illegal house parties that kept us up all night. When we tried to complain about it, they told us to get up and join the party.

It had been a tough year anyway, in which I had to say goodbye to my beloved mamoesjka for good. No more happy stories about my tomcat, just my tomcat, my fiancé and me. We got a break though, when a beautiful apartment opened up at the house of one of our best friends in Williamsburg. The day we moved we found the apartment not quite ready to live there just yet. There was no shower, no restroom and no kitchen really. We found out that Bébert hated renovations. We didn’t see him until two weeks later when all the workmen finally left our – I have to admit – wonderful little loft. 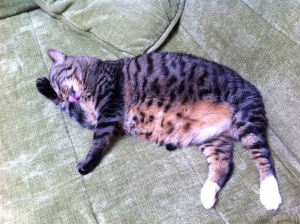 We co-existed happily in this tiny space. We often said jokingly that in fact we didn’t need two bedrooms, because all three animals in the house were always on the same two square meters anyway. Bébert loved to sit on top of my fiancé’s chest when he tried to read a book, only to curl up on my left side and stay there, heavy, huge and very warm until feeding time. Feeding time according to Bébert was always at least one hour earlier than I was willing to get up. I learned to control my body and my breathing waking up, so he couldn’t tell I was awake. I would just doze off happily in my savasana (yoga corps posture) and enjoy my two boys vast asleep on either side of me.

After a couple of years we decided for numerous reasons to move back to the old continent to Umbria, Italy. And Bébert was of course coming with us. We took him on the plane with us and really felt sorry for how afraid he was traveling by plane. It made us decide to move by car from Amsterdam to Umbria six months later. We went in one go, to keep the stress levels as low as humanely possible for him. Most of the ride, he curled up in our laps in the little harness we taught him to wear.

We were really happy that he could finally live outside from now on. He had always been on 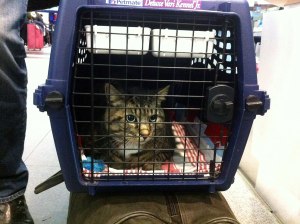 the fat side of the spectrum, and living in a tiny apartment wasn’t helpful, despite all the expensive diet and even organic raw food we tried on him.

So January first we landed in what is now Villa il Bacio del Lupo with our huge Brooklyn tomcat that soon enough combed out the premises. Spring sprang very early that year and Bébert left his spot on the stove to explore the vast outdoors. He soon learned that he had to share it with another tomcat Signor Rossi, a stray that had picked us out to take care of him. They became best frenemies, one moment horsing around in and out trees, the other moment beating the living daylight out of one another.

We had a beautiful though very warm spring and we all worked hard, except for the cats of course, whose job it was to jerk around and demand petting and food. At the end of spring my fiancé and me both had the feeling Bébert wasn’t happy. We told ourselves we were over protective and let it go until he slowly stopped eating little by little. We took him to the vet on a Saturday morning, since we didn’t want to spend the weekend fretting over our little friend. 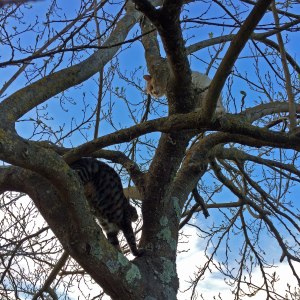 We expected nothing more than a fever, or worse, a penis amputation because of earlier bladder problems he had developed in Amsterdam. Instead the vet looked worried and wanted to keep him for further tests. Within a couple of hours she was on the phone which I know is never a good sign. Our little boy wonder who was only 6 years old was diagnosed with cancer in his kidneys and it didn’t look good.

We got him home with prednison. So strange how cancer has the same patterns and even drugs for humans and animals alike. Still we were so happy to have him home. We had been very afraid he would die without first coming home. The vet said he had a couple of months at best, unless we started chemo. It took him only three very short weeks though. Three weeks in which we let him play outside at night, figuring it would be allright if wild boar or foxes would get to him before cancer did. I sat endlessly with him next to his feeding bowl, which now took him a day to finish and only if you sat next to him, petting his back, him sweeping his long tiger print tail in your face.

Friday night he started to walk with difficulty and began to throw up. He retreated to the 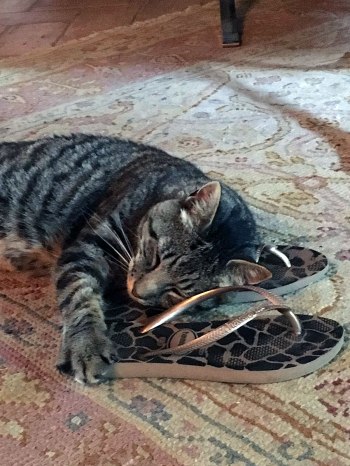 farthest end of our house but would still purr with great enthusiasm when you petted him. Saturday morning came and he couldn’t walk anymore. We knew it was time, and for the last time we took him with us in the car, which he really never had learned to appreciate much. When we opened his pet taxi at the vets’ his eyes where flickering. The deposit of his kidneys had infected his brains. He was very afraid, our poor little boy and our wonderful vet didn’t want to keep him suffering. I took him on my lap, my fiancé and me sobbing like little kids. The vet gave him his final injection and there and then his life ended. Six months to the day he first set paw on Umbrian soil.