Only recently we moved from New York City, to Amsterdam and then to the country side of Umbria, Italy. We had been dreaming for more than a year to move to this mesmerizing spot and this beautiful villa in Monte Castello di Vibio with views on the river Tiber. So you can imagine our excitement and happiness when we were handed over the keys December 17th.

The previous owners were kind enough to leave some wonderful antiques in their now former home, and they even made the bed for us. After the first, busy day, dusk set in and we spied not only a stray cat but also a fox on the terrace. Soon it was pitch black outside and we could see the Milky Way. There have been decades that I haven’t seen the Milky Way, I don’t know about you. I guess I was a bit star struck with the awesomeness of everything new.

Suddenly a bell rang loudly in the peaceful night. Very loudly. But which one? Our brand new premises have two entry gates with different bells. My stout fiancée went outside into the cold night and opened without hesitation the main gate with the remote control. I wasn’t going to stay inside, and ran after him making sure he did come back leaving the door open behind me. No one at the main gate. We sped to the other gate, making our way with the flash-lights on our I-phones while the electric gate was closing very slowly behind us. No one there either. Who would have called on us? Nobody knew we were there. The house had been empty for two weeks before we moved in. Wait a minute…

We remembered that a lot of stuff of the previous owner had been outside for some time to be picked up. Maybe, just maybe people with bad intentions drove by, saw nobody was there and waited for the right moment to move in. We heard many stories of abandoned houses where the copper plumbing had been stolen by criminals. O…MY…GOD. 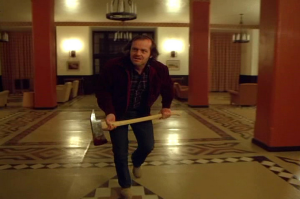 Soon enough we realized we had left the front door wide open so God knows where the copper thieves we’re holding out in the five bedrooms, three bathrooms, garage, kitchen or pantry. Not to mention the many sheds. If only it we’re some men that wanted nothing more than our plumbing. For all I knew Johnny was waiting outside with his axe to make his way through my door when I was finally going to sleep, shouting ‘Here comes Johnny.’ Drastic measures had to been taken.

We made sure we closed every single door, shutter and window and then went on an expedition to comb out the premises, armed with heavy stuff to knock the crab out of any intruder. We decided the gardens were too risky, and that anyone who was still out there couldn’t come in anyway. Or so we prayed. Room after room, bathroom after bathroom we threw doors open like trained police men. No one. Everything was empty.

The rest of the night we spend researching online for security camera’s, flash lights with sensors and of course, watch dogs. I mean, EVERYBODY has a huge german shepard dog here. Why on earth didn’t we think about that before we moved in? What did it matter we didn’t think we would have time to raise him during the renovations, or that our tomcat might not like him? Had it been for the dog, we wouldn’t be frightened as hell now. We went to bed very suspicious of any sound and hardly slept.

The next day at a stunning sun rise that painted the rolling hills in all kinds of pastels, we went outside to test the bells at both gates. Not another frantic night like this, or we had to move. The bell we heard the previous night and set the whole murderer fantasy in motion, was neither of them. We were beyond puzzled and we’re afraid we had overseen another, terrifying option: poltergeists. Then, again, last night’s bell sounded.

Still running through the house, looking for the ghost bell, Marcs I-phone went off. It was Carlo, who was going to bring us 800 liters of diesel for our heating system. He had erroneously first called the landline of the previous owner, then realized that he probably took his phone with him and called the cell. The previous owner did take his phone with him, but he left us the voice over internet and ten amplifiers throughout the house. Just to make sure, he wouldn’t miss a call.